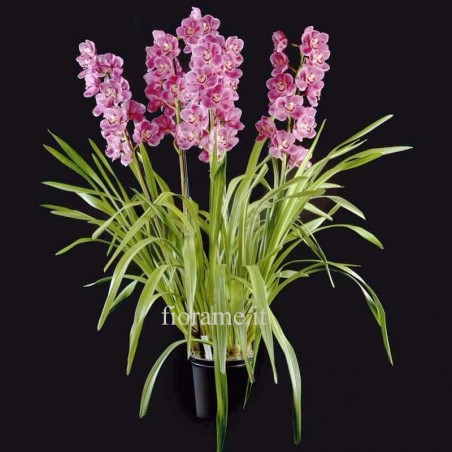 Contrary to most of the orchids that are epiphytic (that is, the roots are anchored on other trees, the Cymbidium is a plant that grows in the ground.

A lightweight thermal excursion between day and night is essential and of great benefit to the plant, both for a healthy growth for a plentiful and abundant flowering.

Light
A lot of light. No direct sun.
Recommended temperature
Greater than 15 °C
Watering
Soak the plant pot in room temperature water for 5-10 minutes, then drain the excess water.
Season of Availability on the market - in Bloom with forced cultivation
Throughout the year
Name
Comes from the Greek kumbos (cavity), referring to the particular shape of the lip.
Origin
Eastern Asia (mainly China and India), but also Africa and Australia.
History
It spread in Europe during the second half of the 1700's.
Family
Orchidaceae