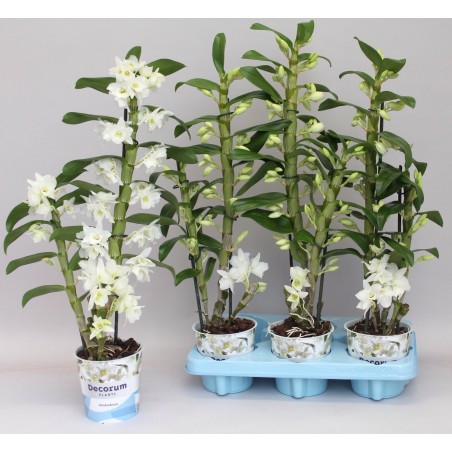 This type of orchid has stems very erect, from white to dark pink and all shades in between.

This plant can reach a height of seventy centimeters.

After the period of growth of the old stem will not bring more flowers, but maintains a reserve function of energy, up to, and passed the cold period, the plant finds the strength to bloom with new buds at the foot of the plant.

The best water to water this plant would be rain water because it does not contain mineral salts.

The tap water contains both mineral salts and limestone in the soil can damage the roots.

The beginning of the season of rest is marked by the yellowing of the leaves.

After the flowering period, place it in a place a bit cooler.

Needs a winter rest with reduced inaffiature and no fertilizing.

Then instead resume instead, during the vegetative period.

Light
A lot of light. No direct sun.
Recommended temperature
Greater than 15 °C
Watering
Wait until the ground is dry. To make sure scrape and probe with your fingers a couple of centimetres below the surface of the ground.
Season of Availability on the market - in Bloom with forced cultivation
Throughout the year
Origin
Southeast asia
Habitat
It grows at altitudes between 200 and 2000 metres in the plain, in the woods, in the mountain forests, mossy rocks.
Family
Orchidaceae