A legend tells that the Holy Family was fleeing to Egypt, pursued by the soldiers of Herod who wanted to kill the Baby Jesus.

Fearing to be achieved, Mary and Joseph were knocking desperately at the doors that were along the road, but as soon as people came to know that the guards they were looking for, not opened or even closed hastily the door.

Now the soldiers were hot on their heels: you already saw on the hill, the dust cloud of horses running at a gallop.

Not knowing who to contact, the Lady asked rose if he could hide among its leaves, at least the Child Jesus.

But the little plant of vanity said, "you can't ask such a sacrifice to me who am the Queen of the Flowers. If the
the soldiers will feel it cry, frugheranno between the leaves and the flowers and them sciuperanno".

"And true, you are the most beautiful, but you are selfish. Now your flowers will wither
early and your rod will be covered with thorns."

Then the Virgin turned to the lives that she behaved as the rose: "For charity, can't risk! If the soldiers suspect that Jesus is hidden among my leaves, I rovisteranno with their weapons, ruining the shoots and jeopardising the growth of the grapes".

"Because you are really fond of your grapes, you will be smitten. Now the branches will be trimmed every year, the donkeys will eat the leaves and the bunches of grapes you can take them away the harvesters."

Now he felt distinctly the gallop of the horses: what to do?

The Lady looked around, and saw a thistle, which at that time was a large plant without thorns.

But the map refused to help: "don't stop, please! Because if they suspect I'm hiding, your son, will take slashes my flowers that I'm raising with a lot of effort."

It was chaste as the rose, the thorns.

Nearby there was a sage flourished, that at the request of the Virgin opened immediately the leaves concealing the Child Jesus and ddormentandolo
with its intense aroma.

So the soldiers, seeing for the way only an old man together with a woman, passed over without stopping.

Taken Jesus, our Lady blessed the sage, saying: "Thou shalt be the plant all the orchards: the sick, you will try to heal, the healthy to cook foods or add flavor to drinks. And all will respect you and protect you as the most useful plant on Earth".

The christian legend, which is inspired by a tópos medieval already reported for other plants, consecrates the reputation of sage (salvia officinalis) as a panacea, but it's also true that once in the countryside, it was believed that the life and health of the master of the house, or his wife, or of the last born follow from that of the sage, as he explains a proverb in veneto:

(Why should the death of the man in whose garden grows sage?

Only because, in the gardens, there is no medicine against the power of death.

The use of sage strengthens the nerves, the trembling of the hands, and for his virtue-hunting high fever.

The sage combined with the castoreum, lavender, the primula, the nasturtium heals the members paralitiche.

Or sage, savior, or mediator of nature!)

The School of Salerno, echoed by a proverb still in use:

If you very want to make a living
sage you have to eat.

And so While he extolled the many virtues: "The decoction of its branches also of the branches, drunk, causes the mestrui, is urinating, and similarly give birth. The wine of the sage, or the leaves cooked in wine, are useful to the whole body, are of great use to the cough, warms the liver and the matrix. Cause the mestrui and urine. The decoction of the leaves, made in water you drink is good for dysentery. [...] It is the sage admirably in all the defects frigid and flemmatici of the head and also of the joints, both taken by mouth as applied outside of why it is useful to the ill-transitory, the lethargy, the stupor, and paralysis, as still to catarrh flemmatici, et all defects of the chest, caused by frigid humori. [...] In short, where there is a need to warm up, dry-up and support, sage is great medicine".

It was also considered to be aphrodisiac, so much so that it is handed down the legend that Cleopatra would have made use of sage and rue to win the hearts of men.

And Aetius, a Greek writer of the first half of the VI century after Christ, was referring in his treated on the medicine: "Agrippa calls it Grass the holy Sage herb sacred, and is particularly suited to pregnant women, and for facilitar their conception.

In Ethiopia, after a great plague which had decimated the population, women were forced to what had happened to drink the juice of sage, the better to conceive, and by this means, the Country was inhabited early on children".

The you were in the countryside, also the property of regulating the monthly cycles: belief is not unfounded, because lately it has been discovered that this effect is due to the presence in the map of an estrogen which regulates the fertility in women.

Its botanical name, Salvia officinalis, reflects its reputation as a medicinal plant it is suitable for many uses.

Comes from the Latin adjective salvus (safe, healthy)and the verb saivere (save).

There is, instead, those who argue that it comes from the German Know-Eib; others from the Greek sózo (cherish, protect) and bios (life): so that would mean "plant that preserves or saves a life".

For this reason, has inspired the symbol of Health.

But also one of the Virtues of the housewife: it is in fact a plant that is simple, beautiful in every season and by the many virtues, which, however, does not show
never; and it's sober because it grows in tiny plots of land.

In the language of flowers to get a blue one means to say to the beloved: "I Appreciate your qualities".

But the sage aurata is a symbol of Venalità, the scarlet of Ambition, the formosa of Abomination, the leucanta Return to the Homeland, it is the perpetual Defense.

At the end of the Sixteenth century-a pupil of Paracelsus, the chemist Osvaldo Crollio, proposed the theory of signatures, according to which the form, color, and the taste of the plant would have been signs of the analog places from nature to make them understand the medicinal virtues.

So also the sage was studied from the point of view of the analog; and from the time that the leaf is vaguely similar to the language, especially its roughness, was extolled as a remedy in the treatment of diseases of the tongue and of the cable oro-pharyngeal.

Not smiling to that theory, as well as other that in the study of nature privilege the importance of the forms, colours, or smells, because many may be the scientific approaches to the natural phenomena: not for nothing the contemporary medicine has ascertained experimentally that the sage is actually a remedy for oral cavity.

Using the infusion for mouthwash can cure gingivitis, wounds on the tongue and irritation to the throat by gargles, sore throat.

On the other hand, from time immemorial, have clean teeth stropicciandoli with the leaves, as was also referring to the Boccaccio in his novel. 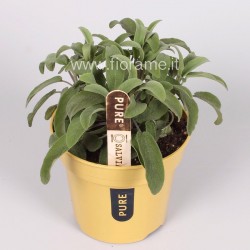