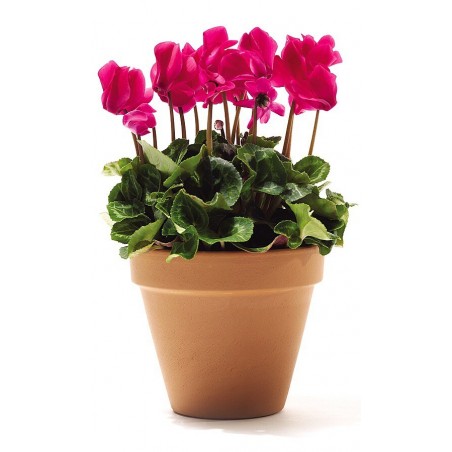 Pliny writes with several vulgar names: “Rapo”, “Tuber”, and “Navel of the earth”.

Even before it was called by the greeks Icthoyethoron (was used as an ingredient to kill the fish).

As it contains the ciclamina, a powerful toxic substance (a glucoside from the effect purgative) was especially known for its therapeutic properties rather than for its ornamental qualities.

It was introduced into Europe in the SIXTEENTH century, and was cultivated in the botanical gardens of queen Elizabeth I of England.

The catholic church saw the symbol of the heart of Mary that bleeds on the earth, and the symbolism taken over by the flemish painters.

Little considered in the EIGHTEENTH century, is back in vogue, starting dalXIX century.

In Japan, the cyclamen is the sacred flower of love.

The uterus plant or cyclamen
Pliny the elder, advised to plant in all the gardens and orchards around the houses, the cyclamen {Cyclamen europaeum) because according to a
the belief of "beyond where it was planted, can not cause damage the filters of evil: the thus called "amulet"".

Instead, it warned pregnant women that if they were passed on his root would have aborted.

The belief that it was an amulet originated from the conviction that would serve as a powerful antidote for the bites of the serpents.

Theophrastus was referring instead, was used to excite the sensuality, and to facilitate conception.

That reputation was born from its shape that vaguely resembles the female uterus.

The is also called panporcino why the pigs are greedy of its tuberous roots, being insensitive to his poison that has inspired

in the language of feelings negative symbols: from Distrust to Despair.

The only moderately positive is a message to the beloved, or the beloved, is not particularly rewarding: Loveliness
without claims.

Its essence, that it is recommended to those born in the third decade of Sagittarius, would favor the union of the people who have affinity to
physical and mental, and to increase personal prestige.

In "Plants and magic scents" Leo Kaiti argues in this regard that "acts on the whole personality and creates around it a real "centre of gravity".

Also you can use it for actions that magnetic thought: you trace out a circle of fragrant, in the middle of the forehead. Try
it is not dangerous! 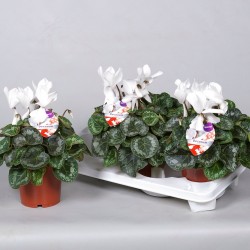