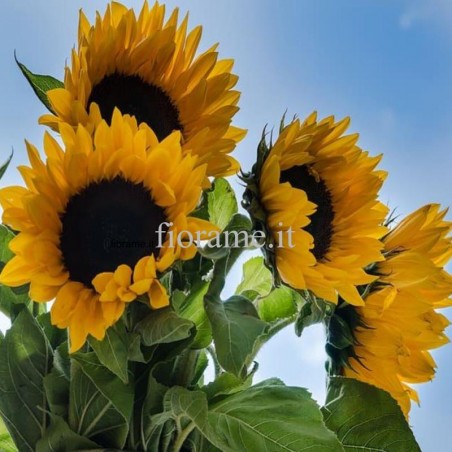 The sunflower insane with light.

Shine in June, the sunflowers, with their smiling, giant, good that its time to turn toward the south, taking in the scent d the light. The summer seems to become incarnate in those big daisies celebrated by many poets. Wrote Eugenio Montale, cuttlefish Bones:

Bring me the sunflower that I may transplant it

in my saline burned ground,

and monsters all day to the blue expanses

of the sky the anxiety of its pale yellow face.

Tend to the clearness of things obscure,

you run out of bodies in a flow

of colours: this in music. Fade

it is, therefore, the fortune of the venture.

Bring you the plant which leads to

to where the blonde transparencies

and vapora life essence which;

bring me the sunflower insane with light.

And, in fact, the sunflower (Helianthus annuus) loves to such a point that the light of the sun, orient the calatide towards the point of greater illumination, to the south.

It is not native to Europe but of America, was discovered in Peru by Hemando Pizarro, brother of Francisco, who brought the seeds from Spain for the hungry gift to Philip II. In the inca civilization was considered to be the symbol of the sovereignty of the god king, the personification on earth of the divine Sun, was accompanied in the rites by warriors and nobles who had in his hand a sunflower gold, plant images of the sun. The priests of the incas, the people attributed magic powers because they had observed that the seeds were arranged along the three sets of spirals that were held in the clockwise and counter-clockwise.

Came too late in Europe to inspire myths like the one that is narrated about the heliotrope, transformed by Ippolito Pindemonte, with his ode to the Helianthus, in a modern myth of the sunflower.

Also, a fairy tale andalusian, too sugary and pathetic, he evoked a symbol that is similar to that of the heliotrope. At the beginning of time there were two brothers, one good, the other dark and envious. One day, the first asked: "Why do speedruns always? We are alone in the world and we should love one another". But the other replied: "I like To live alone. Your presence bothers me, irritates me".

A few years after the young fell seriously ill and, feeling himself dying, he called his brother at the bedside. "I'm going to go," said. "But I would like to keep a good memory of you. Tì I pray, make me a smile, at least once." But the other was quiet, dark in the face. "So hate me?" exclaimed the brother good. "Remember that hatred and selfishness are the torturers of life. Love is instead light." Were the last words. Then the two angels he brought the soul to the Lord, who, moved by his goodness, he said: "To you I will make the star more beautiful of the universe". When the young man the evil he saw burn in the sun in the sky, we recognized the smile of his brother: "Behold, the love that I rejected," he exclaimed, with emotion. "Now I want to contemplate him for all eternity." And the Lord turned it into the sunflower.

Properties of the sunflower, The Incas knew the nutritional properties of the seeds and knew how to obtain fibres from the trunk and from the leaves. We wanted to instead of time, because the europeans discovered that it was a plant oleaginosa, which is of primary importance. His seed, in fact, contains from 35 to 55 percent of oil, from 23 to 31 percent of proteins and up to 20 percent carbohydrates. The oil which it yields, although tasteless, is the cholesterol-lowering and is one of the best fat food. The Russian medicine uses the leaves and flowers of the sunflower, for treating diseases, lung and throat.

Despite all these advantages, and the solar symbolism, in the language of flowers has inspired messages were not reassuring. Send a bunch means to accuse of Untruth, or to declare that a love is unhappy. Bizarre language, because the flower in a normal human mind inspires a cheerful Gaiety. 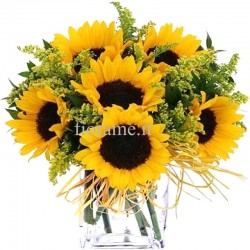