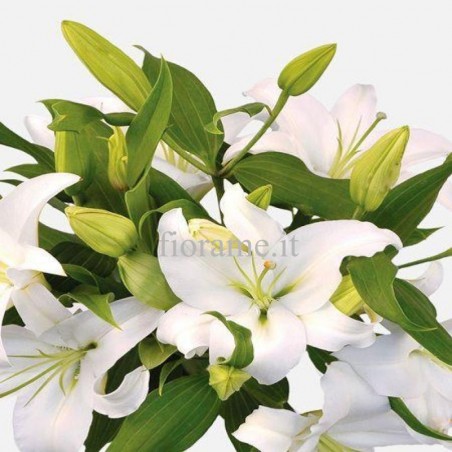 The term Lilium is derived from a celtic word which means white.

Since time archaic the Lilium candidum, a native of Syria and Palestine, has been considered a symbol of fertility for his extraordinary ability to play.

"It is the flower closest to the pink for the reputation and for the affinity of the fragrance of the oil which it yields, said lilino" writes Pliny.

Due to its fertility became an attribute of the Great mother and was considered a sacred flower in the cults of female.

We find it in the hands of women in some of the scenes liturgical engraved on rings found at Isopata, Mycenae and Rutsi.

Appears in female hands on the fruit of The palace of Phaistos, in the stylization of a dance that recalls the one remembered by the University as the dance of the giglio.

The was also mention of Sophocles in the Oedipus at Colonus, and said that the lilies adorned the head of the two goddesses in this rural Demeter and Core, together with daffodils and crocuses are woven into a crown.

In Rome the lily was nicknamed lunonia pink, consecrated to the goddess in the archaic pantheon of Latin was closely connected to sexuality and fertility of women, so much to assimilate many lesser gods, as Lucina, she was the baby, the light of day, Opigena, which gave assistance to pregnant women, Cinxia, which he modelled surrounded by the bride, and Iterduca, who carried the bride into the new house.

In the Old Testament, the lily has inspired the symbols of Beauty and Fertility, but also of the spiritual Flourishing. So it appears in the Song of Songs where, under the veil of a human love is celebrated the love of God for his people. The Bridegroom of the poem is the Lord himself who sings the beautiful bride, symbol of Israel: "As the lily among thorns, so is my love among the daughters [...]. Your two breasts are like two fawns, twins of a gazelle, that graze among the lilies [...]. His lips are lilies dropping flowing myrrh [...]. Your belly a heap of wheat surrounded by lilies".

All of these symbols, old testament and gospel converge in the composite medieval symbolism, where the flower become because of its whiteness, the image of Purity, and, in the wake of the teaching of the Christ, a symbol of Abandonment to divine Providence. And who better than the Lady could embody these virtues? On the other hand, Mary of Nazareth is also the "fruitful virgin", similar to some of the Great Mothers of old, although the theological context is completely different because in the Gospels it is presented, not as a goddess but as a human creature, without original sin.

Even in heraldry the flower was taken as a symbol of Fertility, but above all of Royalty, the terrestrial expression of divine symbolism that comes from the Song of Songs, in the verses in which mention of "the lily of the valleys". It is also observed that the lily of six petals can be identified with the six spokes of the wheel, whose circumference is not traced, that is, with the six rays of the sun: therefore, it is the flower of Glory and Fruitfulness. Famous are the lilies of the French monarchy, even if initially it was not of the flower, but an offensive weapon of the Franks that was in the middle of an iron law, and pointed where he innestavano to the sides two pieces of iron half-moon: all connected by a stick, which formed the so-called foot of the lily. 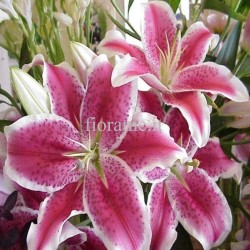 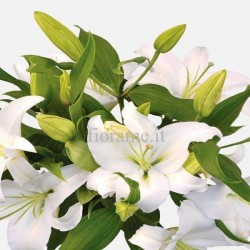