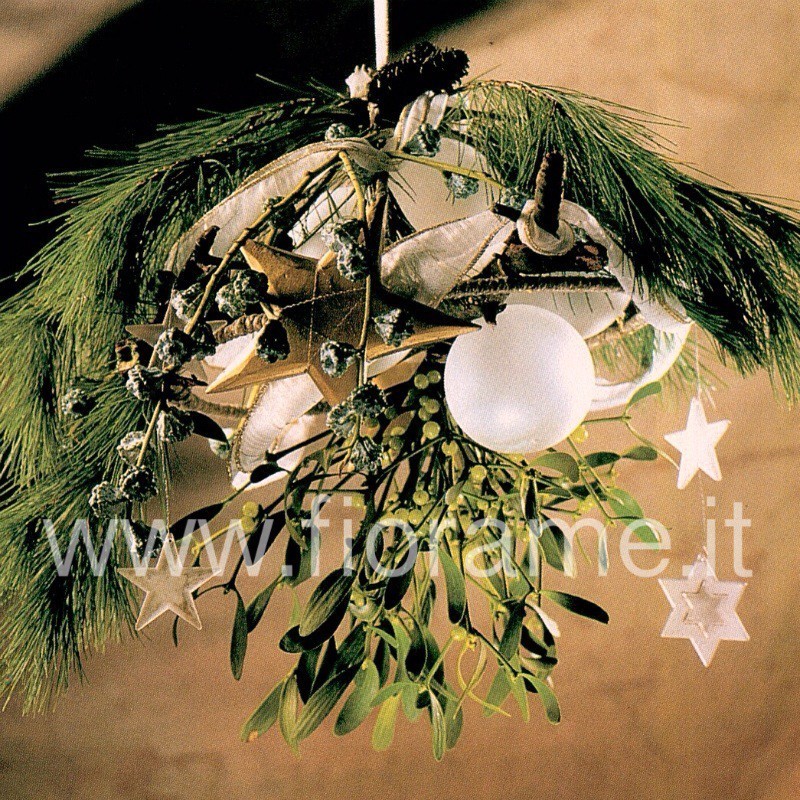 The lightning of heaven: the mistletoe
For christmas, use it to hang sprigs of mistletoe - Viscum album in botany - the door of their houses, or bring the neck a twig, because it is considered an amulet against misfortune and negative influences.

Woe, however, to pick it up with hands and especially with the left: you would attract bad luck.

Once he dropped the mistletoe from the tree by hitting it with a stick or with an arrow; and you had to pull the head on the fly before touching the ground. Precautions, however you judge it, inspired by the symbolism of this plant semiparassita and evergreen that lives on the branches of many trees, especially the pine, the apple and the pear, but also of oak.

It has fleshy leaves, with berries spherical that vary from pearly white to golden yellow according to the tree on which it accrues.

According to another tradition, if you pass in the company under a bunch of mistletoe, you must kiss, and if a girl does not receive this kiss ritual doesn't marry in the next year.

In some region of England, in order to avoid the danger of remaining unmarried women, in the night of 6 January, you must burn deck that has decorated the home during the christmas holidays.

These customs come to us from the Celts considered mistletoe a plant of mysterious, donated by the gods because it had no roots and it grew as a parasite on the branch of another plant.

Favoleggiavano was born there, where there was a fall lightning: symbol of a descent of the deity, and therefore of immortality, and regeneration.

"The Druids - as they called wizards in those Countries - do not consider to be nothing more sacred mistletoe and the tree on which it grows, provided it be an oak", wrote Pliny.

"Choose it as the sacred woods of oak as such, and not perform any religious rite if you do not have the foliage of this tree, so much so that the term Druids may appear to be of Greek derivation.

In reality, they believe everything that comes on the plants of the oak, sent from heaven, a sign that the tree has been chosen by the deity itself.

However, the mistletoe of the oak is very rare to find and when you found it collects with great devotion: on the sixth day of the moon (which marks for them the beginning of the month, year and century, every thirty years), and this is because on that day the moon, has enough strength and is not in the middle.

The name which they gave to the mistletoe means "who cures everything".

After you have prepared, according to the ritual, the sacrifice and the feast at the foot of the tree, are bringing the two bulls white which for the first time are linked to hormah."

The chief of the Druids he caught it with a sickle of gold; the other Druids, dressed in white tunics, put it in a bowl of gold that were showing
then at the veneration of the people.

As is attributed to the mistletoe many healing properties, the immersed in the water that distributed to those who wished to heal from some evil or to protect himself from future diseases.

That water was also considered an antidote against witchcraft and sorcery.

They believe that the mistletoe, taken in a potion," he added skeptical the Latin writer "gives you the ability to breed any animal sterile, and that it is a remedy against all poisons: so great is the devotion that some people turn to things that are mostly unimportant".

Pliny relates that the mistletoe revered by the Celts was the one that grew on the oak tree, considered the tree of the god of the heavens and of the lightning, because on it fell the often lightning.

It was believed that mistletoe fell together with a thunderbolt.

"This conjecture," writes Frazer, "is confirmed by the name of "broom of the lightning" that is given to the mistletoe in the swiss canton of Argau, why this epithet clearly implies the same connection between the parasite and the lightning; on the contrary, the broom of lightning is a common name in Germany for each of the outgrowth, bushy, or in the manner of a nest that grow on a branch because the ignorant actually believe that these organisms parassitici are a product of the lightning.

If there is some truth in this supposition, the real reason why the Druids worshipped a tree, bearing the mistletoe, more than all the trees of the forest, was the belief that each one of those oaks had been struck by lightning but bring on the branches a visible emanation of the celestial fire; so that in cutting the mistletoe with mystic rites they got all the magical properties of lightning."

The customs druidiche continued in France even after its christianization: in fact, we know that in the FIFTEENTH century, the people participated in a ceremony that resembled that of the druids and was called guilanleufo auguilanneuf (mistletoe of the new year).

The belief that mistletoe is a plant of heavenly and universal panacea is also found in other parts of the world. The modern Ainu of Japan consider it to be a medicine useful for almost every disease; and the Vaio of Senegambia, in Africa, revere a species of mistletoe, known as the tob, which they regard as almost a talisman; so much so that when they go to battle they bring him some leaves to protect himself from the wounds.