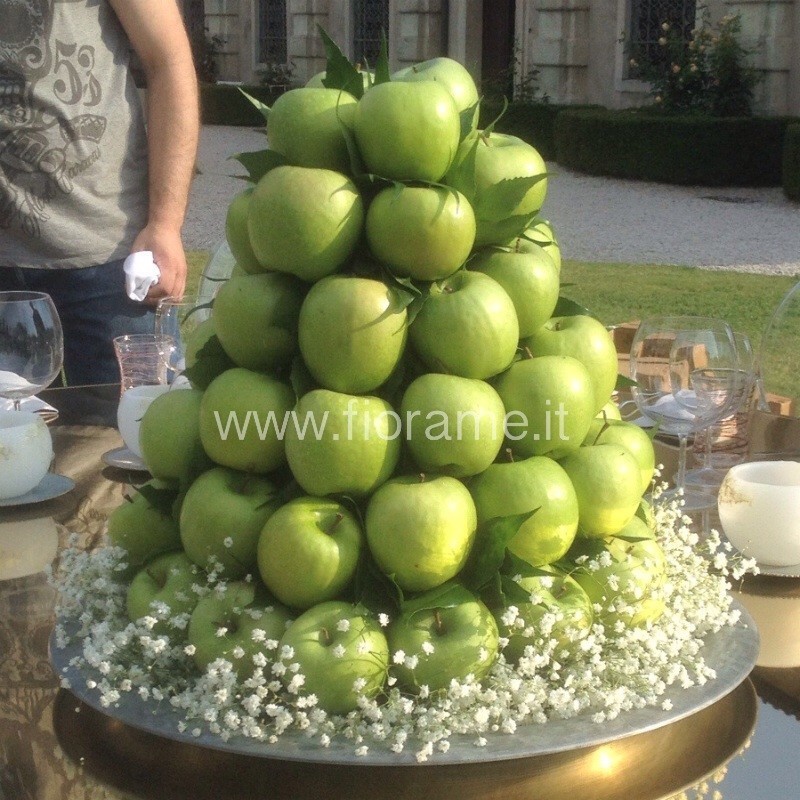 -The TREE OF the KNOWLEDGE of the SAVING

-THE APPLE TO APHRODITE

In our language the name of the apple-tree is the translation of the Latin malum, which comes from the doric malon.

In French you say pomme, from the Latin pomum, which was used to describe any type of fruit with pits or seeds.

The terms English and German, respectively, apple and apfel, derive instead from the root indo-european abel, as aval, the apple in breton and welsh, hence the name of Avallon, the legendary "island of apples", called Insula pomorum from Geoffrey of Monmouth's Prophecies of Merlin.

In that island, where rest the kings and heroes, the deceased, was a refugee king Arthur, waiting for the moment when he could free from the foreign compatriots, the welsh and the bretons; and there, under an apple tree, he taught Merlin the Magician.

This tree also appears in the legendary history of Alexander the great: looking for in India the"Water of Life", the commander discovered apples that lasted up to four hundred years of the life of the priests.

In turn in mythology, the germanic goddess Idun possessed apples wonderful that they had the power to stop aging.

On the other hand, knows that "an apple A day keeps the doctor away": the proverb that reflects faithfully the medicinal virtues, because it contains, in addition to 85 percent water, 13 percent of sugars, organic acids, pectin, tannin, vitamins A, B1, B2, PP, C and E., it is refreshing for the great amount of juice, acidulous, which provides; * it stimulates the digestive glands, protects the gastric mucosa and promotes the absorption of calcium.

--
The TREE OF the KNOWLEDGE of the SAVING

The apple tree is the Tree symbolic of the saving Knowledge that leads to immortality.

A Greek myth tells that Heracles had accomplished the ten labors imposed by Eurystheus.

But Eurystheus, who did not think it was valid, the second and the fifth effort, I imposed on the other two.

The eleventh consisted in seizing the golden fruit of an apple tree, a wedding gift of Mother Earth Was, that he had planted in his garden on the slopes of mount Atlas. Was he had entrusted the custody to the Atlas prior to these he was condemned to hold the celestial globe on his shoulders.

Themes put him in the guard, telling him: "your tree will be stripped from apples of gold by a son of Zeus".

Worried, Atlas built solid walls around the garden, chasing all the foreigners out of his land, and entrusting the sacred tree to the daughters, the Hesperides.

But one day he Was in, noticing that some girls were taking the apples, he commanded the dragon Ladone cover around to the trunk and to mount a careful guard.

When Heracles was given the order to take possession of the golden apples did not know where was located the mysterious garden.

He walked through the Illyria until you reach the river Eridanus, the country of the prophetic Nereus.

Come to the river, the nymphs of the waters led him from god that he was sleeping.

Heracles the agguantò forcing him to reveal the place where they were the golden apples and the way to take possession of it.

Nereus advised him not to take advantage of them with their own hands but to use the Atlas, alleggerendolo in the meantime, the huge weight that weighed on his shoulders.

Arrived in the garden of the Hesperides, Heracles asked this favor to the Titan, that he was willing to do anything to get at least an hour of relief, but was afraid of the dragon Ladone, so that poses as a condition to kill him.

The hero consented to the request by popping an arrow above the wall of the garden that struck mortally the terrible guardian; then bent over the shoulders to replace the Atlas in the task of ruling the celestial globe.

The Titan returned shortly after with the three apples collected from the daughters, but had no intention to resume his thankless place.

"I will take myself up the apples to Eurystheus" he said, "if you reggerai the sky on your shoulders for two or three months yet."

Heracles pretended to agree; but, following the advice of Nereus, who had warned him to refuse the proposal, begged Atlas to support the globe for a few more minutes: the time fasciarsi the head.

The Titan, tricked, put down to the ground, the apples taking up his load; so that the hero could collect the fruit away with a salute of mockery.

The myth is actually an allegory of the initiatory path, where the one who tends to the divine communion must pass one or more tests to be able to receive from the divinity or from his ministers, the golden apples of the saving Knowledge.

THE APPLE TO APHRODITE

During the wedding of Peleus and Thetis, Eris, or Discord, threw a golden apple with the inscription "The most beautiful".

There arose a dispute between hera, Athena and Aphrodite, Zeus refused to settle delegating this task to Hermes, who led the three goddesses on
mount Ida where Paris, son of Priam, he would have made by the referee.

The young man was grazing his herd on the mountain Gargaro, the highest peak of Ida, when Hermes appeared to him, together with the three goddesses, and gave him the golden apple: "Paride," he said, "because you're a young, so beautiful, as an expert in affairs of the heart, Zeus commanded you to choose the most beautiful among the goddesses".

The shepherd, bewildered, took the apple between her hands, "How can a simple cowboy like me become the arbiter of divine beauty?" objected to it.

"I shall be forced to divide the apple among the three goddesses."

"You cannot disobey the orders of the almighty Zeus," I warned Hermes.

"On the other hand I do not I can offer you my advice. Makes good use of your intelligence."

"It only remains for me to obey," sighed Paris.

"But first I would like to pray to the future losers not to reserve a grudge. Are only a mere mortal, easy to commit stupid errors".

The three goddesses promised to willingly accept his decisions.

"I have to judge them as they are, or nude?" asked the young man embarrassed.

"You set the rules of the competition," replied Hermes with a mischievous smile.

"And so I beg you to kindly undress."

The god invited the goddesses to obey, turning their back for the discretion.

Aphrodite was the first to strip naked, but Athena claims rightly that you sfilasse the magic belt, thanks to which he could fall in love with all those who approached.

"Okay, I have accepted the goddess "but as long as you levi, the helmet with which you're horrible".

"Now," said Paris, "I want to examine one by one in order not to be distracted from the discussions. First of all, it Was."

"Esaminami closely," he pleaded her, "and remember that if I shall judge the most beautiful, and I will make thee master of all Asia, and I make thee the richest of men."

"I don't let myself buy... I have examined enough. Is now next, Athena."

The goddess promised to make it the most beautiful and the most wise among men, and the winner of all the battles.

"I am a humble shepherd, not a warrior", he replied Paris.

Then it was the turn of Aphrodite who approached him at this point to make him blush for the emotion: "looks good, Paride, why do you not escape even a particular.

As soon as I saw you I said to myself: "This is the most beautiful young man of the whole of Phrygia! how ever it is forced up a mountain, to rule a herd?".

Why don't you go to the city to live a civil life?

To marry, for example, Helen of Sparta, which is beautiful and ardent as me?

I'm certain that if she saw it would be ready to leave his house and his family.

"Never until today," replied Paris, as if hypnotized.

"Can you describe it?"

"And blonde and fair-skinned, delicate being born from a swan's egg. Can boast of having Zeus as a father because he has generated it together can Leda in the guise of a swan. Now is the wife of Menelaus, brother to king Agamemnon; but that is not a serious problem. If you want will be yours."

"How is that possible if she is married?"

"How much are you naive! Don't you know that is in my power to resolve similar issues? You'll need to visit in Greece led by my son Eros. As soon as you have reached Sparta, he will make sure that Elena will fall in love with you."

Aphrodite and he swore solemnly and Paris gave her the golden apple.

But drew and hate uncontrollable of hera and Athena, who turned away plotting revenge: the future destruction of Troy.

The anonymous author of this myth was in reality deceived by a representation in which he saw Heracles not giving but receiving
the branch of the apple from the Hesperides, or the naked, the triad of the goddesses the nymphs.

In the new patriarchal culture of the ancient myth was the latter strain.

In any case, the episode helped transform the curvilinear apple, an attribute of Aphrodite, the symbol of feminine Beauty and also of carnal Desire, so much so that Vincenzo Cartari, in his "imagini delli dei de gl ancients described as the image of the goddess:

"The chariot of Venus drawn by swans and doves to you holy, image, above said tank naked with three Gratie seco, as they are the Saxons, the will paint, with three golden apples in one hand and a ball in the other, dimostre gold us via the licentiousness, shows the all-naturai
carnal desire for generate".

A further symbolic mutation occurred in the christian middle Ages when the Tree of knowledge was often depicted with an apple tree and the fruit of the original sin with the apple.

In reality, the story of Genesis does not describe this tree.

The choice of iconography of the apple tree as the Tree of knowledge in the christian art of the medieval and then modern seems to be inspired by the ancient iconography of the aegean: the one, as you may remember, which showed the goddess surrounded by the Serpent and by his son, Star.

But here the parts are changed: the dea has become the companion of the Son, and the Serpent has taken on the role of the Tempter, as it appears the patriarchal figure of Iahveh.

However, beyond the apple, the primary source of the myth of Genesis is not the aegean, but in the middle east: an ancient myth, the Persian, tells us that Meshia and Meshiane had lived on fruit until the demon Ahriman had persuaded to deny the Lord.

Thus they lost their purity, they cut down the trees, killed the animals and commit other sins. 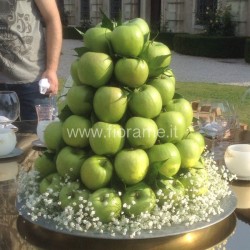 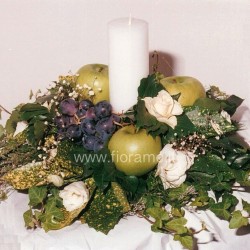 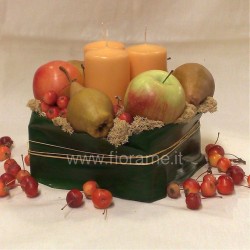 FRUITS AND CANDLES from € 19 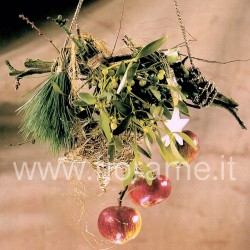 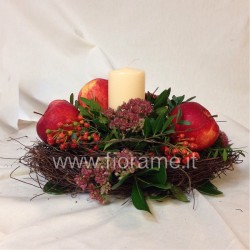 APPLES AND CANDLES from € 19