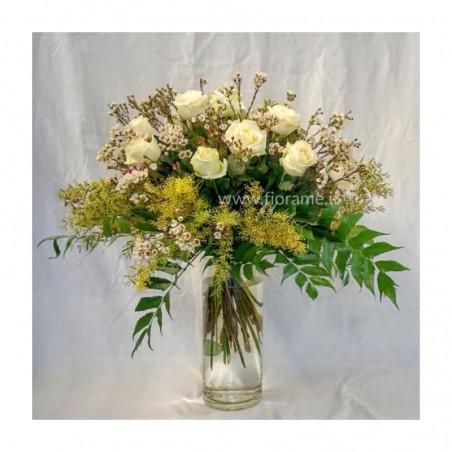 Choose how many units you want (1 Unit = 1 white Rose + accessories).

Those who want to be at height any situation, give this elegant bouquet of flowers, built on the tones close to white.

The choice of soft furnishings that accompany the pink are used to give voluptuousness to the superb white roses are always charged to the petals.

If you want to add a jar located on the bottom of the page.

The SIGNIFICANCE OF THE NUMBER.. my grandmother recited in the dialect of veneto:

5. Sinque from Inamorato - Five in Love

9. And the number that develops the trinity: each element of a triad is divided into three.

12. You mean something that is done as is the Circle drawn in the sky by the 12 constellations during the course of the year.

18. It is a variation on the theme of the dozen and half-dozen, even if it is an even number (see below).

24. And the number that continues the sequence of the dozen, therefore, the perfection, the completeness, the totality, etc.,

With the exclusion of the dozen and half-dozen typically do not use the even number.

Instead it should be used if you remember an anniversary or birthday.

The reason for this?

The odd number represents dynamism, as it is to give a floral tribute.

On the contrary, on two legs at a standstill on themselves.

Deliverable within
The same day
Delivery areas
Deliverable on Vicenza and its sorroundings municipalities
Photos
Sample photo; items not available will be replaced with other similar ones in colors.
Shank length cm.
Fifty
Elements
The white rose, mondial, Chamaelecium, Mimosa moonlight acacia howittii clair de Lune, Cyrtomium falcatum fern
Size cm.
In the picture diameter cm. 55
Maintenance
As with all cut flowers, place the can in a pot with water up to the point of ligation - The complete instructions are at the bottom of the page at the link: Maintenance and zen flowers.