It is cultivated in a variety of ways.

And what to do when there are no more flowers? Immediately below the fourth internode cut off the stems, have a little patience and within a few weeks they will develop new flowers.

The party can start over!

The Phalaenopsis is a plant that has known the success relatively late of the time.

But it can never be missed, whether it's a modern rather than a classic environment.

And you don't necessarily have to have the green thumb. It's very easy to give her the right care.

Your Phalaenopsis can flourish without any difficulty for several months.

It's a genre of epiphytic orchids.

Comprises about fifty species, all originating from Asia and the archipelagos of the Pacific Ocean and the Indian Ocean.

(drawn from the book by Alfredo Cattabiani " Florario. Myths, legends and symbols of flowers and plants, " Edictions Oscar Mondadori. A book to read and consult! )

In ancient China orchids were associated with spring festivals and were used to ward off the nefarious influences and in particular sterility.

The doctor Dioscorides advised to eat the tubers of the orchids as a remedy against sterility.

But the beauty of the flower of the orchid has also evoked the symbol of Harmony, and even the emblem of Spiritual Perfection, because the carnal and earthly beauty, as Plato has taught, is not if not a materialization of that invisible to our mortal eyes.

Light
A lot of light. No direct sun.
Recommended temperature
Greater than 15 °C
Watering
Wait until the ground is dry. To make sure scrape and probe with your fingers a couple of centimetres below the surface of the ground.
Season of Availability on the market - in Bloom with forced cultivation
Throughout the year
Meaning
The name Phalaenopsis derives from the Greek words phalaen (butterfly) and opsis (similar to).Indicates the similarity of the flower to the shape of the butterflies.
Origin
Includes about fifty species, all native to Asia and the archipelagos of the Pacific Ocean and the Indian Ocean.
Habitat
It is a genus of epiphytic orchids.
Family
Orchidaceae 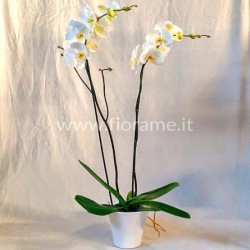 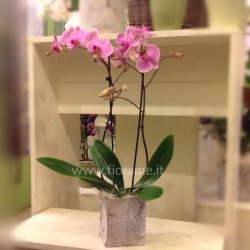 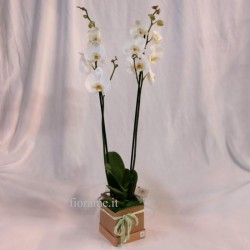 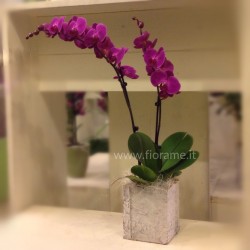 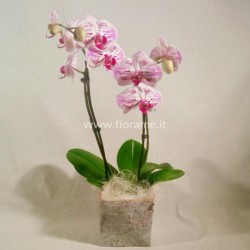